Every foreigner in Japan knows what I’m talking about. The day you need to show up at immigration to renew your visa. For most, it’s a tedious day off of work but for others, it’s a sad day because they are denied an extension. For everyone, it’s a day of standing in long lines and waiting for your turn. So how much social distance theory is adhered to at Tokyo immigration. 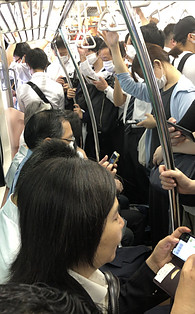 A lot of the foreigners who live in Japan live in Tokyo. We travel to the Shinagawa station by train then stand in line for the bus to the Tokyo Regional Immigration Bureau. Yesterday the line was longer than I have ever seen it and the rain/wind was turning a usual trip to immigration into an adventure.

When I arrived at the train station and walked down the stairs to the bus area I was greeted by the line officials, they showed me to line seven. My first thought is that I’ve never seen the line this long. My second thought was there is no social distancing whatsoever. I remembered the days when I didn’t think about how close someone was to me and smiled underneath my mask.

Obviously, other people didn’t think the line would be this long because they didn’t bring their umbrella. They must have thought they would be standing in line one where there is protection from the rain. Unfortunately, they had to stand in the rain for 40 minutes before they would reach line one. The wind also played its part by completely shredding a few umbrellas adding to the people who were standing in the rain without any protection.

As time advanced so did my line. Each line ahead of us filled a bus and everyone moved over until my line was number one. We all entered the bus until it was completely full and I was standing near the front. There was no social distancing because only five people would have got on the bus if there was. With so many people going to immigration many would not have arrived had social distancing been in place.

Upon arriving at immigrating everyone departed the bus and the line officers guided us around the building till we reached the end of a very long line. I don’t believe foreigners in Japan are worried so much about the coronavirus as they are getting a visa extension. The whole area around the immigration building was packed and it was only 7:30 AM. 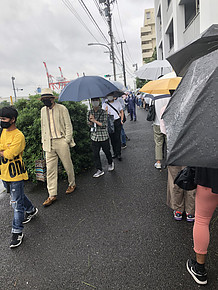 My thoughts drifted back to when I was leaving the bus area and I was looking at another seven lines of people waiting in the rain. The immigration workers are going to earn their money today I thought. All of a sudden the line started moving and I was snapped back to reality. After standing on the train, in line for the bus, on the bus, and now for immigration, my feet were trying to tell me something. I think the message was sit down.

However, there was no place to sit. About halfway to the immigration front entrance, I was assigned a letter designation and the time I would enter the building. Letter A at 9:30. I was free to do what I wanted until 10 minutes before my time. A walk to the nearest convenience store helped to alleviate the pain I was feeling from standing for so long. Plus I was able to buy a cold drink which was refreshing in the humid weather. The social distancing at the convenience store was only two feet.

Returning to the immigration building I found line A but the person in charge of line A would not let people line up because line B at 9:15 needed to go first. Line B was on the other side of the building and they needed to walk through line A to enter the building. Line A and B were set apart by cones and plastic bars between the cones. The person in charge of line A has us bunch up near the entrance to the line A starting point. 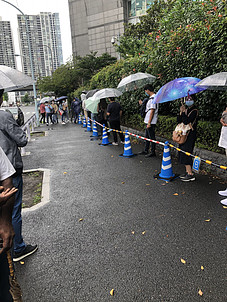 When looking at lines A and B I could see small signs attached to the bushes about standing a certain distance apart for social distancing. The signs were so close together that it made social distancing irrelevant. At 9:15 line B moved through the line A area and into the building. Line A was able to get in line and wait for 9:30. Everyone disregarded the social distancing signs and no one was told to adhere to them.

At 9:30 I entered the building and used the provided hand sanitizer as requested then moved quickly to the correct area for my visa extension. Seats were full because immigration had every other seat marked with an X informing people not to sit next to each other. Once a seat became available I was able to sit for the first time in several hours. My body thanked me and I waited my turn by watching the digital number board. 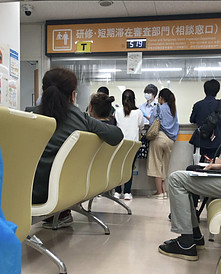 When my number came up I bunched up at the window with several other people. After a long discussion with an immigration officer, I was sent to the convenience store in the immigration building to buy a payment stamp. Upon returning I was sent to a small one-on-one conference office and handed my extension. Time to enjoy some much-deserved ramen for lunch and return home.

As you can see there is no real social distancing when going to immigration in Tokyo. Plan accordingly by ensuring you have a facial mask and alcohol to use on your hands. Don’t let your visit to immigration end in disaster. Stay safe so you can continue enjoying your time in Japan. I doubt Japanese authorities believe in the social distance theory. At least in the immigration area that seems to be the case.