Before my first time visit to Japan, I knew very little about the country. This is a list of what shocked me the most.

Japan is not only clean but super clean. Everyone helps and it’s not unusual to see people cleaning sidewalks and roadways. I had to create a game called find the trash because trash is so hard to find.

Check out my article Why is Japan so Clean here.

If you thought you could look for the local trash bin to win my game think again. There are no trash bins. Each person is responsible for their trash and usually carries it with them until they get home.

The only way mass transit can work efficiently and effectively is if it’s on time. People don’t want to use mass transit if it’s always late or you never know when you’re going to arrive. In Japan, the trains are always on time. I had no idea that there was a country where mass transit could be used. I always considered it a joke and a waste of money.

Some of my first pictures in Japan were of vending machines. I didn’t need to walk far in Japan without seeing several. In the United States they are all but gone because of crime but here in Japan vending machines sometimes cover whole city blocks.

Sleeping on the train 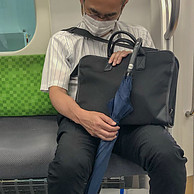 People who work in Japan are often exhausted because if long hours at work with little or no time off. Children also have long hours at school with after school clubs and sports. It’s not uncommon to see half the passengers on the train asleep in the morning or evening. Japanese even sleep standing up. 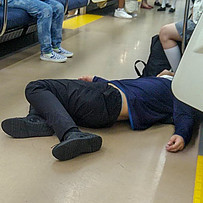 Passed out on the train

You might be thinking that sleeping and passed out are the same and sometimes they are but not in this case. This time passed out means drunk beyond the ability to maintain consciousness. I had never seen this before so it was a shock.

Everyone is so nice

Please, thank you, and excuse me are common in Japan. The Japanese go out of their way to maintain social graces. The first time someone bowed at me multiple times I started looking for Emergency Services because I thought there was something wrong with them. I found out that this is one of the highest forms of respect.

I Can Walk Around all Night without getting Mugged

If you’re walking around at night in most other countries you’re either looking for trouble or you’re going to be in trouble. My first visit to Japan I thought people walking at night were crazy but I soon found out that crime is almost nonexistent in Japan. I can walk around all night long and the only thing I need to worry about is what drink I want from the vending machine.

With such an efficient mass transit I thought it would run 24/7. I found that trains run till midnight and if you’re not on the train going home by then you’ll need to book the closest hotel because the trains stop every night for 5 hours.

Older Adults are in Shape

I visited a few parks my first time in Japan. There were always older adults exercising. I’m not talking about 50-year-olds but 90 and beyond. People in Japan aren’t waiting around to die, they are active and maintain their bodies so they can live long healthy lives. Very different from other countries I have visited.

Okay, it’s a bunch of older adults working out but I was blown away when I learned the average age was 75. They look like a bunch of 50-year-olds. I started re-evaluating the life choices I have made.

I thought working 40 hours a week was too much until I visited Japan and learned that several Japanese work 40 hours in the first three days of their 6 day work week. Work is their life and they wouldn’t know what to do with time off.

Check out my article What to expect when working in Japan here.

The friend who was showing me around my first visit to Japan was feeling Ill so I told them to take a sick day and rest. I was shocked when they asked, “What’s a sick day?” I learned that if you work for a Japanese company you only get 10 days of vacation a year. No personal, sick, or any other days off. If you’re lucky you get a few days off for holidays. Also, you can only take a few days of vacation at a time but only if the company won’t be inconvenienced if you take time off.

I thought it was quiet where I’m from in the United States. A farming community with not much happening. When I visited Tokyo for the first time I felt like my small community back home was loud. I thought how can such a large city be this quite. No loud music, cars going by, people yelling, horns, or anything. The loudest noise was crickets chirping.

Every child who attends school in Japan wears a school uniform. When I first saw this I thought I was in the area of a Sailor Moon convention. After I found how much one uniform cost I understood why the population of Japan was in decline. It cost a fortune to raise children in Japan. 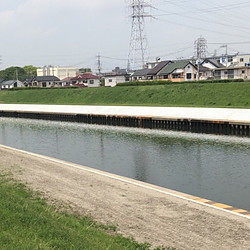 The first rivers I looked at in Japan were partially encased in concrete blocks. I found out later that this is to control flooding. Rivers where I’m from flood all the time but no people are affected (just a few cows).

Companies take their customers out for dinner and drinks. A company will also send an employee to your house for free to ensure you’re happy with the product.

When you are being helped you are the focus of that employee. The employee doesn’t help 4 customers at once. This makes you feel important and more inclined to buy. Customer service here on the Travel and Japan YouTube channel. 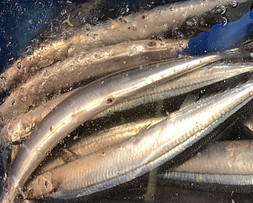 My first visit to the grocery store in Japan and I was in awe. The section for fresh food was most of the store while the processed food section was small. Fresh food was low priced but processed food was expensive. The complete opposite of the United States, Philippines, and Europe.

Stairs are everywhere in Japan. I visited McDonald’s and had to carry my tray up a set of narrow stairs to sit and eat. I later found that this is typical in Japan.

I also found myself carrying my luggage up the stairs several times. I had assumed that all train stations had an elevator.

Check out my article What luggage set should I bring to Japan here.

The first time I visited Tokyo I was wondering where the overweight people were. I thought the entire city was full of models. In the United States and several other countries, it’s normal to see overweight people.

An Apartment for 4 People

I was shocked to find out that a four-person apartment in Japan that rented for ¥120,000 ($1,000) could fit in my living room in the United States.

Check out my article Apartment rental in Japan here.

My first two-week visit to Japan and the only bald man I could find was me. Talk about being self-conscious.

Every culture is different and I’ve seen several. However, I believe that Japanese culture is the most different I’ve seen and the first culture that made me want to buy a toupee. If you want to visit Japan you need a plan. Check out my plan a trip to Japan page here.

What shocked you on your first trip to Japan. Let me know in the comment section below.

Do you have a question about and of the above topics? Ask in the comment section below.